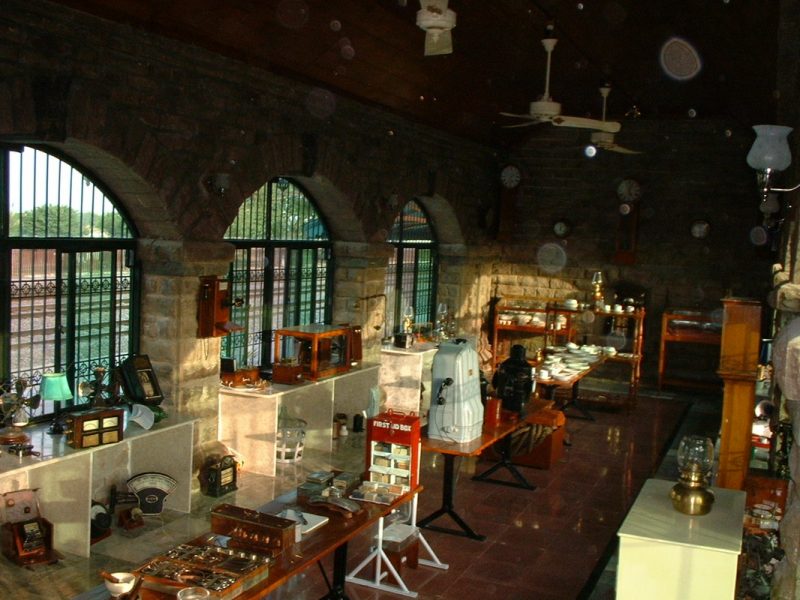 Golra Sharif Railway Museum, also known as Pakistan Railways Heritage Museum, located near Sector E-11 of the federal capital of Islamabad, is the site of a venerated railway museum housing relics and memorabilia associated with railways dating back to the days of British Raj.

The railways station with its museum is one of the major attraction sites for tourists, locals and railway enthusiasts alike in the country. Actually, it is a junction station in Rawalpindi Division of Pakistan Railways, located at 1,994 feet above the sea level, in the southeast of Margalla Hills and east of the cradle of Gandhara civilization, the ancient city of Taxila. The junction is full of memories, explaining the hustle and bustle of more than hundred years, which inspires history lovers and explorers.

The station was established in 1882 during the British rule and upgraded as junction in 1912. It was the logistics artery of British India during the Afghan military campaigns at the turn of 20th century. Since then it has become an important trade route which protrudes into Afghanistan through the famous Khyber Pass.

The Railway Heritage Museum was established in October 2003. From relics dating back to the inception of railways in the subcontinent by the British to memorabilia depicting the creation of the museum are housed and preserved in this heritage site.

The Rail Heritage Museum is housed in three different halls to contain artifacts reflecting history of railway over a period of more than 150 years including almost 100 years of undivided India.

Talking to APP, Mohammad Aslam, an official of Pakistan Railways said that around 20 trains used to pass through this junction every day when it was operational during the British Raj. He said that the junction also served as royals’ passage for holidays when they used to come to the hills of the present-day Islamabad.

As a part of the museum, there is a big yard where cranes, trolleys, saloons, locomotives, coaches and tracks are marshaled impressively, portraying the railway’s march forward through time. The museum houses a blend of artifacts covering many facets of the railways systems.

Mechanical models, signaling systems, communication tools and evolution of operational protocols are preserved and chronologically displayed in the museum.

The museum of Golra Sharif also displays the social impact and anthropological implications of railways on human geography of multi-racial subcontinent. The open yard displays a wide array of relics which have become extinct on the railway lines around the world.

The steam and electric locomotives, a German postal car, a saloon car used by the last Indian viceroy, Lord Mountbatten, and another saloon car belonging to the Maharaja of Jodhpur from the Jodhpur railways given as a wedding present to his daughter are a few examples.

The Golra Sharif museum was envisioned by Ishfaq Khattak, the then DS of Rawalpindi Division. In late 2002, the Headquarters issued instructions to all the divisions of Pakistan railways to scrap all the old items including crockery, furniture, locomotives, and saloons for narrow gauge lines.

Ishfaq Khattak saw it as an opportunity to accumulate all the relics and create a heritage site. By the end of 2003, this feat was achieved mostly due to the diligence of officers working on the project without any funding from the government.

It was the unabated love for the railways which had been the major driving force towards the completion of this project. Though the museum was inaugurated officially on March 5, 2007, it had already opened its doors to the public on September 26, 2003.

An official of the Railways while sharing his views about its opening has said that a number of government and foreign officials alongside a huge crowd of public graced the place and made the event memorable. He said that whether it is the saloon cars of yore or the long-forgotten steam locomotives; this museum has got it all. “Everything has been fully preserved within the limited resources of the organization. A new building has been constructed on the premises which would be converted into an art gallery and a Café”, he added.

The setting-up of the Railway Museum was an attempt to preserve and display vintage items and artifacts related to the history of railways at the Heritage Point. Places like Golra Railway junctions are not only an attraction for tourists but also narrate stories of the past with historical importance.